Fine Art student Maddi Crease was selected to attend an event at Buckingham Palace organised by Camilla, The Queen Consort. The event highlighted the threat of domestic abuse and violence against women. 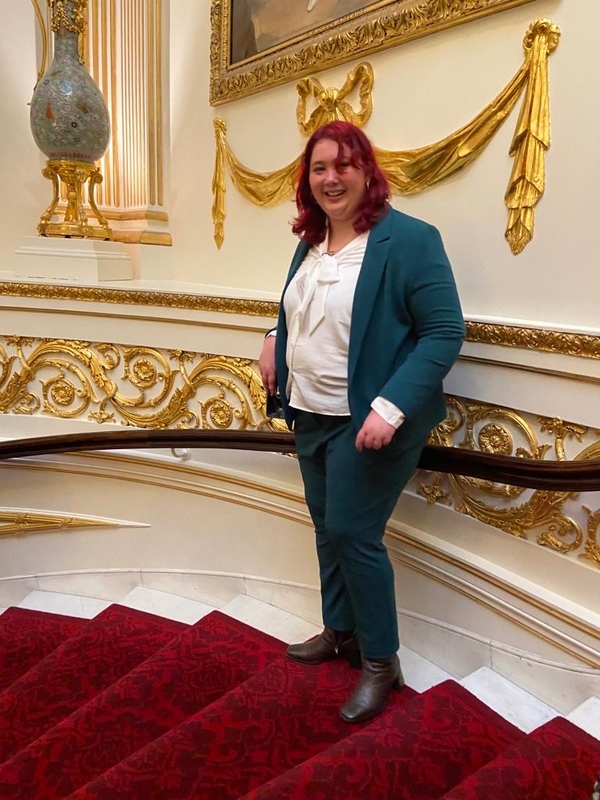 Maddi is in the second year of a Fine Art at South Essex College and works in Participation and Lived Experience which means she use her personal experiences of mental ill health at work.

Maddi explained: “I mainly train professionals and work on developing research and projects that help young people struggling with their mental health. I have worked in participation in some capacity for about four years now.”

Maddie received the invitation to attend the Palace from a colleague.

Maddie said: “I was selected as I have previously worked on a project for young women and girls which at times covered experiences of violence and abuse. I also have my own experiences directly relating to my gender, and to abuse.”

Of her day at the palace Maddie said: “My colleague and I met and went to the palace just after midday, where we were part of a group of around 300 others in related work. We all gathered in the Picture Gallery, which was amazing for me as a fine art student.

“We were able to spend some time interacting with each other and learning about the valuable work going on across the UK.

The Queen Consort, Camilla, gave a speech on her learning of violence against women and girls and what her hopes were for our future. We had the opportunity to meet her, and briefly speak with her.

“We were at Buckingham Palace for a few hours, with food and drink provided. The best part for me was hearing from others in sector, and learning more about the work being done to help women.”

This was the Queen Consort's highest-profile effort to raise awareness about one her most personal causes, with palace sources saying she feels "passionately" about this issue. Maddie said that as a survivor of abuse, she felt greatly honoured to have her work recognised at such an event.

She added: “It proved, as many things do, that there are new ways of life after these situations and that a person’s value is not determined by the actions of others, but by what they choose to uphold. It was a real moment of reflection for me.”

If you are experiencing domestic violence please contact Safeguarding@Southessex.ac.uk or phone: 03455212345

For more information about these issues email Break The Cycle at btcsafesteps.org